​Who can forget the 1975 thriller film "Jaws", that made everyone just a little weary about going in the water.  Though it lacked the special effects of movies today, the idea of a giant, man eating, great white shark lurking in the waters, awaiting its next potential victim makes me shudder within and convinced the minds of plenty, that the water is not always the safest place to be. Winning much critical accaim and awards, Speilburg's Jaws will certainly go down in history as one of the best films ever created.
​
Upon speical request, I get the task of recreating a combination of scenes from this very movie within a bottle.  Please enjoy!
Carving the Hull:
Like most of my models, the "Orca," is carved from a block of bass wood the has previously been cut in two halves.  Above left, you can see the outline for the cockpit is sliced into the wood using an exacto knife, which allows me to easily scoop out the interior with chisels.
Above right, dowels are inserted into one side, which keeps the two halves lined up during its fabrication, and allows me to reassemble the pieces exactly once it is inside the bottle.
The cockpit and what would be the interior of the cabin has been roughly carved out.  I applied a light coating of stain on the flooring and transom.
Developing the Cabin:
Paint and Details:
Once the boat gets a little paint on her, there is a huge transformation that takes place, often making it appear as if I have missed photographing many steps in between.  Above, you can see the two separate sections of the hull laid out with a ruler to give size.  Harpoons are attached to the cabin sides, the bow now has its pulpit, made of wire, and the windows of the cabin are made of clear plastic sheets, so that light can pass through.
Above: You get an idea of just how the cabin will fit onto the hull.  Once everything is fitted together the boat truly starts to represent the real "Orca."  The mast with all its rigging lines remains to be made, as well as the shark, the shark cage, captain, and crew.
The Mast:
A Few More Details:
The Shark:
The shark is carved from sculpey clay.  This is a really great medium to use because it doesn't air dry, giving you ample time to work on your project.  It holds its shape well and is also easy to work with.  Small pieces, like each individual tooth can be added, knowing that they won't break off later, after it's cooked.  Once the sculpture was complete, I cooked it in my kitchen oven.  Of course, I took liberties on the actual size of the shark, making him even larger than he was in the movie.  Overall, it should make the whole scene just a bit more impressive!
​Ready for the Bottle:
After the fun and creative building process, I was ready to begin the complicated procedure of inserting the Jaws scene into the bottle...piece by piece.
Inserting Scene in Bottle:
Setting up a space to work is very important when inserting a ship, with multiple parts, into a bottle.  The difficult part, is that the strings (though not many) pass through multiple parts of the hull which are inserted in different phases into the bottle.
Laying out the ship on a work space with all the strings organized is incredibly important, but no matter what you do the strings will get caught and wrapped around everything.  I don't know how, but a single string will manage to tie its own self into a knot!
Basically, once I got all the pieces in the bottle, I had one big mess that had to be organized!  The two halves of the hull were pressed together, and the cabin top positioned, pressed down, and glued in place. I slowly began pulling all the strings tight, which raised the mast into position.  These strings were taped to the outside of the bottle, while each string was glued and cut off one by one after drying.

Finally, the paper was removed from underneath the model and the boat positioned and epoxied within the sea of putty.  The diver and cage was also pressed into the water and white caps and foam were then added to the sea surface.  Final touches on the whole project include a turks head and label on the neck as well as two famous lines from the movie, one on each side of the stand.  Hope you have enjoyed reviewing this project!
​COMPLETE! 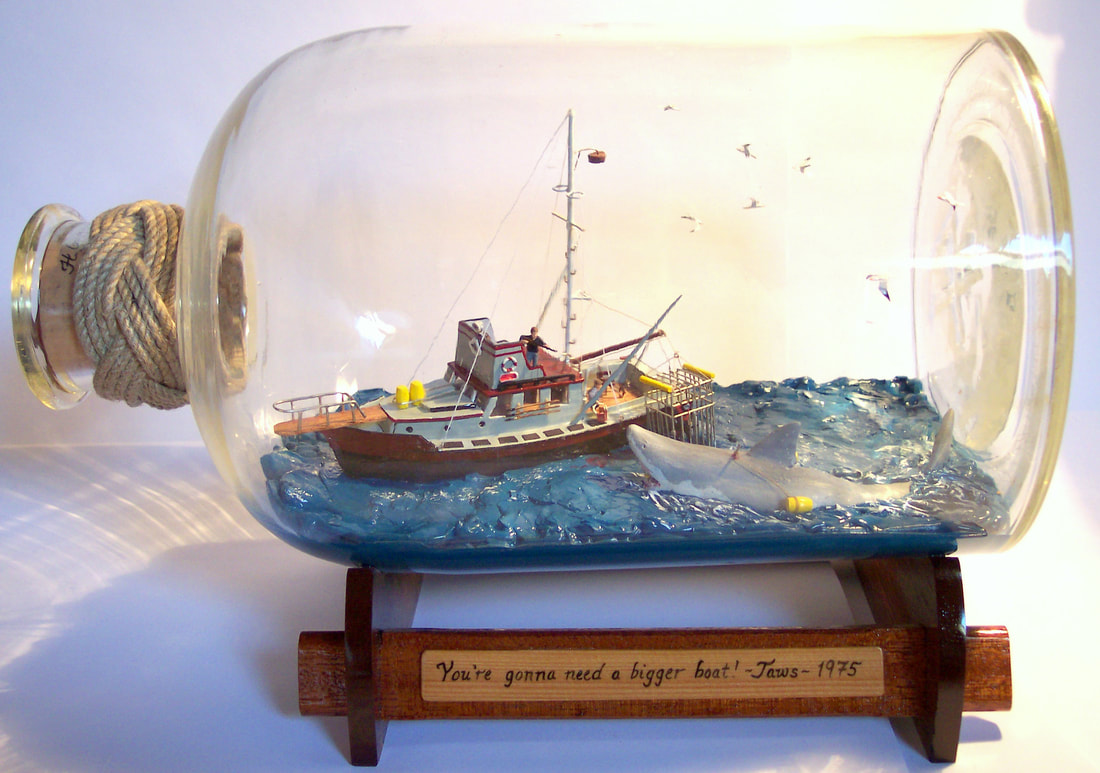