About Us & Our Models: 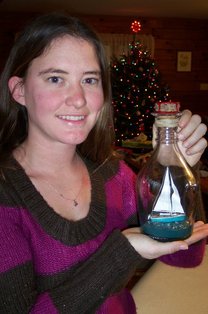 Gabrielle (Heather) Rogers is a small town girl, from Mathews, VA and has a great interest in all sorts of arts and crafts.  She is an artist who studied fine arts at Bridgewater College, where she received her Bachelors Degree in fine Art.  She currently lives in Blonay, Switzerland.

After college, her interest in sailing really blossomed and she was lucky to meet Stefan and begin sailing on Wabi, their forty foot sailboat.  The only thing she needed was an art form to take along, and after viewing a demonstration on putting ships in bottles while visiting the Maritime Museum in Beaufort, North Carolina, she was set on beginning her new trade.

Building ships in bottles is not the only art she produces.  She is also a competent glass artist, constructing stained glass and mosaics.  She has worked in the field of traditional graphic design, creating signs and lettering on boats, practicing hand painting and vinyl methods. And, she enjoys making her newest artform of highly detailed silhouette paper cuts.

Gabrielle produces ships and scenes in bottles on request for clients around the world.  She has participated in arts and crafts shows as well as maritime festivals in and outside Switzerland.  Her work has been exposed in galleries, and she has been recognized and filmed in Passe-Moi Les Jumelles, a swiss television series. 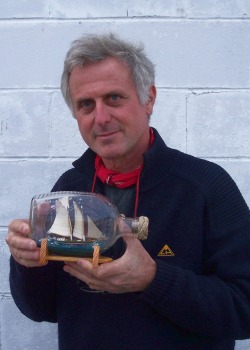 Stefan Auer was born in Switzerland and grew up in Vevey, on the shores of Lake Geneva.  He has been a sailor all his life and has participated in racing boats on Lake Geneva.

After building his own boat, he sailed over to the United States from Europe and got established on the Chesapeake Bay as a boat builder.  His skill and craftsmanship in the boat building trade have allowed him to complete multiple boats.  One of his latest accomplishments was the building of the "Explorer" for the Deltaville Maritime Museum.  This was a  reconstruction of the barge used by Captain John Smith to explore the Chesapeake Bay and was built as a part of the Jamestown Foundation's, America's 400th Anniversary celebration.

Stefan took up building scale models and half hulls because he saw it a wonderful way of down-scaling his trade and keeping the overhead low, while still building boats that he would never have dreamed of building in real life.