​I was requested to build this scene in bottle to celebrate the achievement of Benjamin Von Wong's 30 meter underwater photo shoot in a Mexican cenote for the Ballantine's "Stay True" campaign.  The project was completed in July of 2015, in eleven days, and took over 50 hours to complete plus the time for research.  The scene is displayed in a Ballantine's bottle and filled with liquid from the Ballantine's finest scotch whiskey bottle. 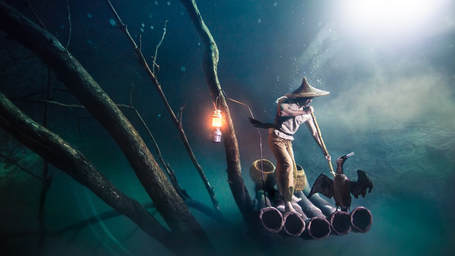 This is the photograph of the scene that I would be putting in a bottle.
Benjamin Von Wong was contacted by Ballantine's Scotch Whiskey to make a photo shoot of his choice for the Ballantine's Stay True Campaign.  His dream was to create a scene of a Chinese Cormorant fisherman, 30 meters underwater, in a Mexican cenote, just above a layer of toxic, but mesmerizing, hydrogen sulfide.
With the raft and props securely in place, and the lighting resolved, he, his free diving model, and a team of divers, made the descent and pulled off a miraculous photo-shoot, making the impossible dream a reality!

Here is the link to his site, it's much too interesting to pass up! http://www.vonwong.com/blog/underwaterfisherman/ 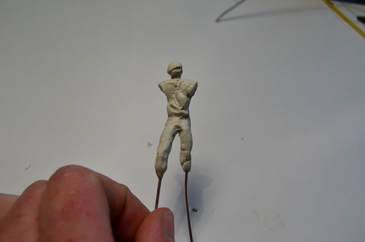 Sculpting and Painting the Scene:
The biggest challenge for this project, was that I needed to build everything, so that it would 'survive' in a liquid environment.  Therefore many materials I would have normally used had to be omitted.  I chose finally, to build my scene, nearly completely, out of sculpey polymer clay.

​The persona, cormorant, and branches were built with a wire skeleton, on top of which, I sculpted the clay, slowly building up the details of the face, clothing, and details of the body.
Inserting the scene into the Bottle:
I thought fabricating the scene itself was the challenge, well 'boy was I wrong!'  Not having a physical "ocean" inside the bottle to anchor your parts in makes everything ten times more difficult.  I also had to use a 5 minute epoxy to glue the pieces in place since something like super glue might not hold up as well underwater.
The problem became, how to get the pieces in position and keep them there while the epoxy set, gluing them to the glass surface.  In short, there was no easy solution!
With the branches in position, I inserted the raft, first, gluing it together, then placed it on top of the branches that formed a platform. Next up, the man, who barely passed through 17 mm neck opening! Then, the baskets were added and finally the little cormorant.
The arms were a real struggle to attach, but in the end I was really happy with their position.
The label was hand lettered with a calligraphy pen on archival parchment paper.  Photo below shows "Ballantine's" old label, which I did replace with the current logo for final filming.  ​
UA-112198577-1 UA-112198577-1